According to Myrtle, Selina gave birth to her son Lawrence and brought him back to Steeple Aston to be raised by his grandparents, Joseph Wells Bishop and Mary Ann. No-one knew who Lawrence’s father was and after having her baby Selina returned to service in London and was not heard of again. Myrtle is still in contact with Lawrence’s daughter Deena, now Deena Rose, who lives in Deddington.

In the 1901 census Lawrence, then aged 12 years, is recorded as being with his grandparents in Steeple Aston. His name is recorded as Lawrence A. Bishop and his birthplace is given as London.

He certainly spent his childhood in Steeple Aston as he is recorded in the School registers.

Note that his name is given as Laurence Payne Bishop and his date of birth is 15 Apr 1888.

There is a baptism record for a Lawrence Arthur Payne Bishop on 16 May 1888 in Peckham st Jude, Southwark, London. The birth date is given as one month earlier on 16 Apr 1888 (differing from the school record by one day). The names of the parents are given as Selina and Albert John. As Payne is an unusual name to be used as a first name, maybe we have a similar situation to that of Joseph Wells Bishop who was given his mother’s surname of Bishop and his father’s surname as a middle name. It is quite possible that Lawrence’s father was called Albert John Payne.

At the time of the 1891 census (when Lawrence was only 2 years old) he is recorded as Laurence A. Paine in Barford St Michael where his grandmother Mary Ann grew up. On census night he is a visitor at the home of Mary Ann’s sister Sophia together with her niece Martha (daughter of Mary Ann’s sister, also called Martha). As Lawrence is recorded as a vistor, is it not known where he was living at the time.

Where was Selina all this time? In the 1891 census, she was in service in Kensington. Her sister Caroline was in service there with her. If Selina returned to service after having Lawrence, then this is probably where she returned to. She is not with Lawrence’s father, Albert.

In 1912 Lawrence married Hetty Cook in Lower Heyford (the next village to the east of Steeple Aston). By this time Lawrence had dropped his extra middle name of Payne. Unfortunately Hetty died in 1933. Lawrence remarried the following year, to Lily Caroline Hounslow. He had now reordered his names and is recorded in the marriage register as Arthur Lawrence Bishop. It seems he continued to use this format as, when he died in 1962, this was the form used on his headstone. 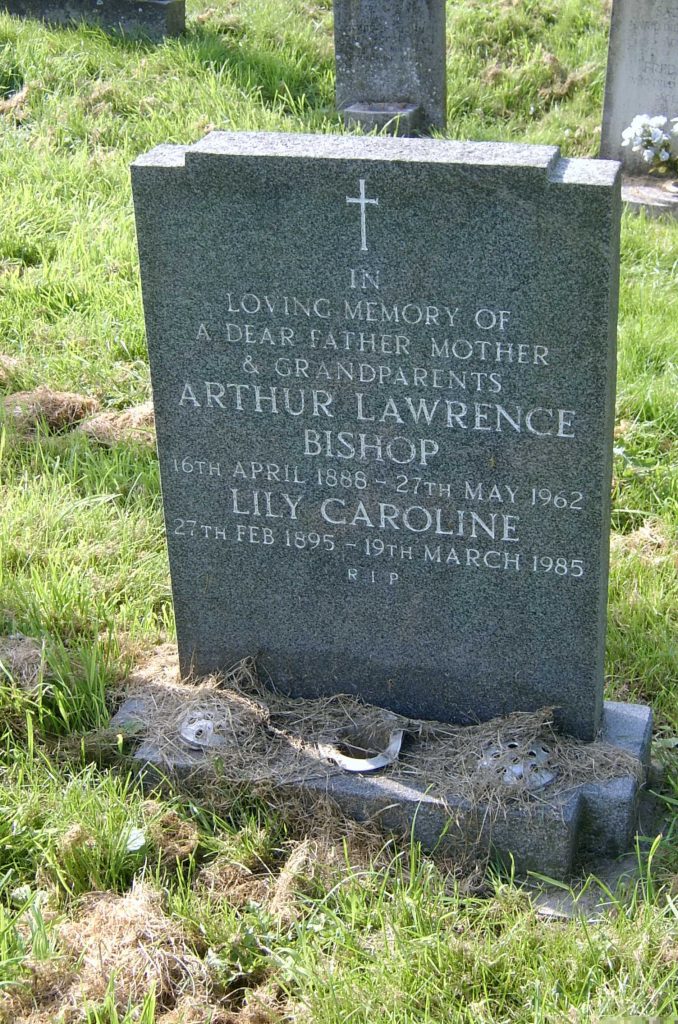